Early one Wednesday morning, while on their Die Matie delivery route, an exhausted Kathryn

runners. After questioning the insanity of 6am exercise, the pair decided to interview the group.

Thankfully for the interviewers, the Neelsie was chosen as the venue for the meeting and not a

– there will be many to follow), began the interview by explaining how Everyrun grew from

just five friends exercising together into a group of over 100 members.

Sitting on the deck in front of MyBrew, Padiachy was dressed the part of stereotypical athlete:

in 2015 not just as a means for people to get fit, but rather because “a bunch of friends wanted

to run together and spend time together”.

On the topic of friendship, Padiachy introduced Gracia Fatuma as one of the original five

runners. Her French accent telling of her origins in the DRC, and amidst giggles and eye-rolls

when remembering how unfit she used to be, Fatuma said: “I couldn’t even run one kilometre

without walking. I continued training with the group, and by the end of the year we gave

ourselves the goal to complete our first 21km run.”

Fatuma studied her BCom at SU, and is now pursuing her Honours at UCT in financial analysis.

Her dedicated, driven attitude was emphasised when she expressed how “[in my first week of

joining Everyrun] I tried to run 5kms and I had injuries. But I [have] learned how to take good

care of myself if I have an injury. I know how to treat it. I can perform sport therapy on myself

that I learned from running.”

Clearly, Fatuma is one of the group’s most dedicated members and, through her commitment

to Everyrun, has learned how to take better care of her body. She also learned what not to eat

before a run, and said that “I found you can’t finish a race if you don’t eat properly”. Her

that she didn’t explain further.

Not all members of the group present at the interview, however, began their journey with

Everyrun immediately after knowing about the group. Gerald Williams, an engineering student

thesis), betrayed himself when saying how he only joined the group to mooch lifts off members

going to races. “[I] sat on the [WhatsApp] group for about a year as one of those lurkers waiting

for opportunities to catch a lift to races. Then I was like…wait…there is something I am

After deciding to step out of his comfort zone as a solo runner, Williams explained how

incredible his first run with the group was. His passion for Everyrun seemed to grow as the

interview progressed, as did his jokes and personality.

When asked if he finds Everyrun to be a stress relief, Williams exclaimed that “running

encourages you to push yourself mentally”. Further, the cliché of “a healthy body healthy

Giggling the loudest of all in response to her fellow-runner was Judy Mellet, a final year BAcc

break. “I always say that joining Everyrun is like having coffee with friends, but while

“Mentally, it is so nice belonging to something that everyone is passionate about,” explained

Mellet. On the topic of passion, Mellet also expressed how hers grew when she reached the

goal she set herself when she began running with the group. “My goal was to do a 21km before

themselves personal goals. “When you have a goal you’ll push yourself to reach that goal, and

if you have a purpose to run you will push yourself to run – you will continue to show up.”

Attention was then turned to Padiachy, whose furious nodding in agreement to what his co-

runners said once again showed the fellowship of this group. As a closing remark to what

seemed more like a catch-up amongst friends than an interview, Padiachy said the following:

“For me, I love seeing people get active. What makes this group different is just the people and

the fellowship, and, to quote High School Musical ‘we’re all in this together’. Run with people

who support you. If it’s us, you are very welcome.” 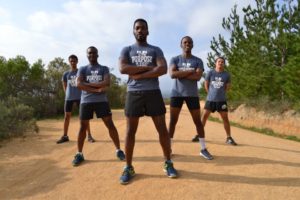